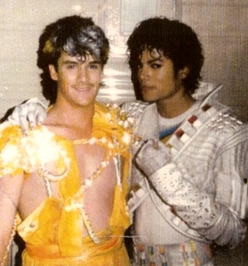 DAYTON, Ohio – Barry Lather has been dancing since he was 5 years old. His love for dancing extends back to his family roots, where his mother Joan was a dance instructor and father George owned a dance supply store. Today, Lather is a professional choreographer and director who has directed multiple live television performances at shows including the MTV Awards and American Music Awards, and world tours. He has expanded his resume of choreography by working with a lengthy list of performers, including Janet Jackson, Mariah Carey, Boyz II Men and George Michael. Among that list of entertainers is Michael Jackson.

Lather first worked with Michael on the set of 1985’s “Captain EO” as a background dancer. He said he had recently moved from Atlanta, Georgia to Los Angeles and was excited to audition. “I auditioned in Los Angeles for the role as a background dancer with 12 hundred other dancers and Michael picked 40 of us,” Lather said. “At the end of the project, I asked if I could get a picture with Michael, and we were still in costume from filming.”

According to Lather, being a background dancer in “Captain EO” was exciting, but Lather said another dream of his was to strengthen his dancing abilities and become a choreographer. He said the first person to offer him a chance to choreograph was Michael’s sister Janet. Lather said, “Janet wanted to try something new,” he said. “I was just 20 years old then and had danced in a couple of her previous videos, and I remember her saying, ‘I have a video I’d love for you to choreograph.’” Lather said the video Janet was speaking of was for her song “Pleasure Principle.” According to him, working as a choreographer for “Pleasure Principle” was a pivotal moment in his career because it offered him new opportunities to work with a variety of entertainers, and the ability to pursue new projects with Michael.
In 1992, Lather worked briefly on the set of Michael’s video for his song “Jam,” but said his next big project with Michael came in 1995 in New York City for a Home Box Office concert special. The HBO special, titled “Michael Jackson: One Night Only,” never aired due to Michael’s health at the time, but according to Lather, “He was a trooper and never stopped focusing on the show.”

Lather said he suggested an idea of videotaping his choreographed ideas and sending them to Michael and his team. “I began filming my choreography in March 1996, and I made up brand-new steps, trying to come up with the coolest, edgiest steps to send to Michael,” he said. “I was there for the taping of ‘Ghosts’ and asked, ‘Did you guys use any of my [dance steps]?,’ and Travis said, ‘Dude, we used like half of it.’” (Besides new choreographed material, Lather said a lot of the “Thriller” routine he created for the HBO special also appears in “Ghosts,” because according to him, “Michael loved it,”).
Barry said he always respected Michael, "because he always respected me," and said he was happy to share his memories because "the world deserves the chance to read something positive about a great person."